Kon on TV B92: The virus does not weaken by passing through human bodies 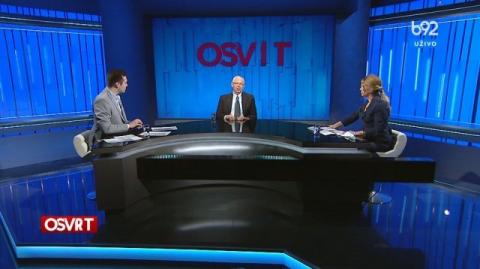 "If, on these first days, we had an average of five, six patients a day, and if we did not 'jump' to double or triple numbers in one day in the second week, we came to the desired result in the first two weeks", Predrag Kon said for a show "Review" on TV B92.
He stressed that it is important that the situation is still closely monitored because it sometimes happens that, even when the disease is slowed down, it becomes more widespread.
Kon stated that it was clear that the coronavirus was circulating in Serbia, but that it is not so widespread, which was contributed by measures of self-isolation, surveillance, and use of disinfectants.
That all, he says, gives a pretty good result in slowing down the transmission of the virus.
He stated that as the presence of the virus is higher, in a few weeks a serious jump of the infected can be expected, because if it happens in Europe, it could be the case in our country.
Kon said it was certain that the ban on the work of educational institutions will be introduced, and that if the measure was implemented immediately, it would take longer, until the number of patients started to decline. He stressed that initially everyone tested was negative for the virus and that the situation was different now.
He stated that tests for the coronavirus are performed on the basis of criteria, that is, those who qualify for suspected infection.
"It is important that we continue to monitor flu-like illnesses on a daily basis and that any severe respiratory infection, regardless of travel and contacts, will be tested," he said.
He said it was important to first consider whether there was any suspicious contact with the infected, and that without testing, anyone who was in contact would also be...