Turkey expresses concerns over legitimization of YPG in east Syria 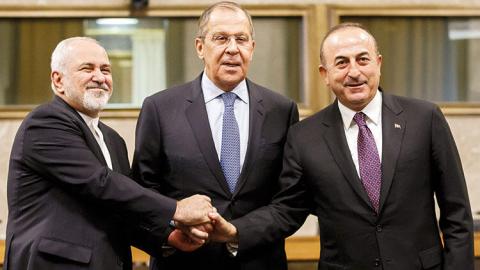 Turkey has expressed concerns in a meeting with Russia and Iran over the acts by the YPG in eastern Syria to legitimize itself through fait accompli.

A written statement issued by the Turkish Foreign Ministry highlighted issues discussed at the meeting and the Turkish stance on crucial matters concerning the developments in Syria, particularly in Idlib and the east of Euphrates.

"Çavuşoğlu briefed his counterparts on Turkey's stabilization activities in the field, following Turkey's disturbance of the fait accompli by the PKK/YPG terrorist organization in the east of the Euphrates," read the statement.

Çavuşoğlu expressed Turkey's concerns on the ongoing acts of terror by the YPG and continued attempts to legitimize it as a result of the failure to fully remove the YPG from the regions as foreseen by the Memorandum of Understanding of Oct. 22, 2019.

The memorandum of understanding was brokered between Turkey and Russia in the wake of Turkey's unilateral military operation into areas in northeastern Syria under the YPG's control. The deal allowed Turkey to create a safe zone between Jarablus and Tal Abyad.

The Astana partners have also reviewed the developments in Idlib province of Syria where a ceasefire has been holding since early March as a result of Ankara-Moscow deal.

"The parties expressed their satisfaction in the decrease of tension in Idlib thanks to the Additional Protocol of 5 March 2020 to the Memorandum on Stabilization of the Situation in...