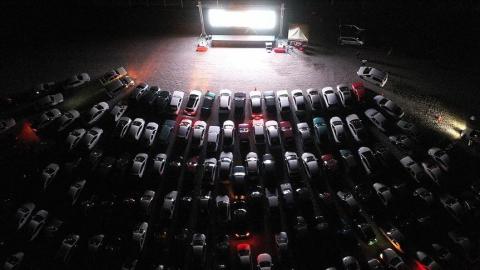 Residents of the Central Anatolian province of Nevşehir have pulled up in their cars at a makeshift drive-in cinema to watch the film "Müslüm," which depicts the life of the late famous Turkish singer Müslüm Gürses, as Turkey's cinemas have gone dark amid the coronavirus pandemic.

The Nevşehir residents parked their vehicles from across the screen with the help of municipal officials and were distributed popcorn and soft drinks.

The cinema's venue is originally a truck garage, where trucks would be parked on normal days.

Mayor Rasim Arı has said they have decided to organize similar activities in order to boost the morale of people who could not leave their homes and whose social lives have been restricted during the COVID-19 pandemic.

"Our task is to do what is necessary for society," Arı said.

"We were planning to organize open-air cinemas in neighborhoods, but we suspended this project as part of coronavirus measures. But then we thought of organizing such an event," he added.

Meanwhile, the İzmir Metropolitan Municipality also organized a drive-in cinema event in the city where COVID-19 restrictions were experienced.

The first 750 vehicle owners who were able to fill in the registration form could participate in the movie screening, according to the official website of the event.

"During these coronavirus days, we locked ourselves in houses and got bored. For İzmir residents who could not leave their homes, we organized simultaneous 'Cinema in the car' at six different spots of the city. It was a nice nostalgia with soda and popcorn," Tunç Soyer, the İzmir mayor, said in a Twitter post.

The history of the drive-in cinema concept, in which spectators sit in their cars and watch movies, goes back to...