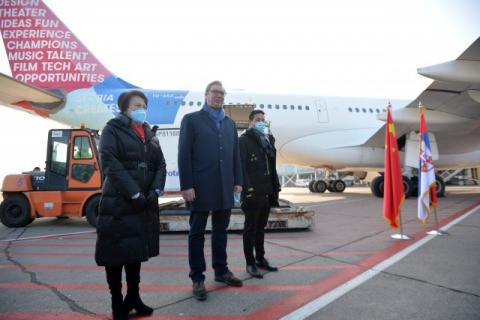 "This is an incredible thing, I don't know if people understand that," Serbian President Aleksandar Vucic said.
Vui said that Serbia is the first country in Europe to receive such a large amount of Chinese vaccine. As he says, that is a significant proof of cooperation and friendship between Serbia and China.
Chinese Ambassador to Serbia Chen Bo stated that she was very honored to receive the vaccines of the Chinese company with the President of Serbia.
"China is the first country in the world to promise that its vaccine will be a global public good. The vaccine was approved on December 30 last year and is already arriving to Serbia. I hope that the arrival of the Chinese vaccine will help suppress the epidemic in Serbia," Ambassador of China said. The President of Serbia said that this is a great day in the fight against coronavirus.
"I was so daring that, since the Chinese vaccine is expensive, I begged the President of China to help us in that respect as well," said Vucic.
He announced that about 20.000 more doses of Pfizer vaccine would arrive on Monday, followed by 250.000 doses of Sputnik V vaccine.
"Serbia is one of the few countries that can boast of such a large number of vaccines. It is important for us to get these doses of vaccines because we have to vaccinate both the army and workers who work in stores. We will also put journalists on the list. It was a request of the Association of Journalists of Serbia. From Monday, they will also be able to be vaccinated. Thousands of lives will be saved and that is the most important mission," Vucic emphasized.
Vui announced that Serbia will have five to six different vaccines in the middle of the year.
"Through COVAX, we will see that we get the AstraZeneca vaccine...