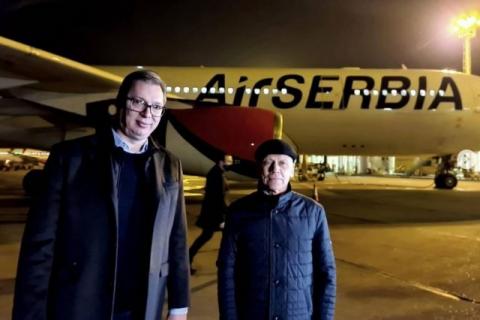 The Sputnik V vaccines, 100.000 doses for revaccination, were delivered by Air Serbia plane.
Russian Ambassador to Serbia Alexander Botsan Kharchenko and Serbian Minister of Health Zlatibor Loncar were present.
Vui told Botsan Kharchenko that another 58.000 Pfizer vaccines will arrive in Serbia tomorrow, but that after the Chinese vaccine, Serbia has acquired the most of Russian vaccines.
"The Russian vaccine is with 293.000 doses, right behind the Chinese, followed by Pfizer with 170.000, but with tomorrow's quantities it will be 230.000," he said.

He added that he talked with Ambassador Botsan Kharchenko about the production of the Russian vaccine, which will be a difficult task.
"We are at the beginning, it is not going to work in a day. We will pack first, I hope by June, and then we will see what we do," Vucic mentioned. According to him, Pfizer will reduce the delivery to Serbia in the coming weeks, it will be 16.000 a week, and then a little more at the end of March and in early April. Vui said that Serbia provided 2.620.000 vaccines, for about 1.400.000 people. "It is important for our small country, and we have not received any vaccine from the COVAX program," he said.
As he said, thanks to friends and freedom policy, Serbia managed to provide vaccines for 25% of the adult population.

"I want to thank Putin"

"I begged President Putin to help us even more, I am satisfied, so I owe a big thank you to President Putin," he said.
As he said, the essential work in the coming period is ahead, and that is to make the production of the Russian vaccine in Serbia by the end of the year.
"Coronavirus will not go away, it will not disappear, we will just have to get...

Break off relations with so-called Kosovo