Vucic: the whole nation will get vaccinated 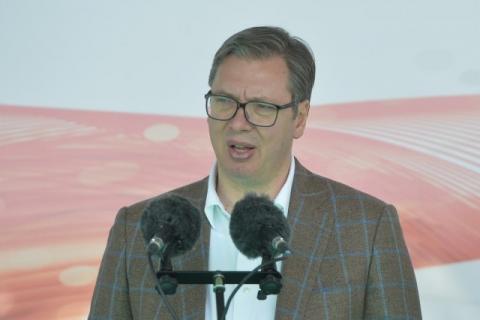 The President of Serbia told Financial Times that a potential restriction on the export of vaccines from the European Union could jeopardize the vaccination process in Serbia.

"How can they do that? I don't think they will do that, because that would be unbelievable. Everyone in Serbia would be furious," President Aleksandar Vucic told the London paper.
Condemning the EU's plans, Vucic added that Serbia had already paid doses of Pfizer vaccines and agreed on the tranches.
"I don't understand how they can remove me, I have already paid and I have agreed the delivery day," he said.
Brussels has proposed, according to FT, "discretionary blockades of vaccine exports" to third countries with a higher immunization rate than the EU or those that offer vaccines produced in the EU to "vaccine tourists" or import vaccines from the bloc, but do not send them in return.
Once shipment of Pfizer arrives with another million doses of Sinopharm, which are expected next month, Vucic predicts that 2.2 million citizens or 37 percent of the adult population will be fully vaccinated by the end of April.
"The whole nation will get vaccinated," he said.
FT writes that foreigners can also apply through the E-government portal for vaccination in Serbia and that thousands of citizens from the Balkans and other parts rushed to Serbia to receive the vaccine, adding that Serbia started immunizing asylum seekers in migrant camps on Friday. 4,000 health workers in neighboring Bosnia were vaccinated.
However, Vucic rejected the criticism of "vaccine tourism".
"We give vaccines to everyone for free ... We try to be helpful and support everyone else, because even if we are good with the vaccination process, it does not mean that we will be...