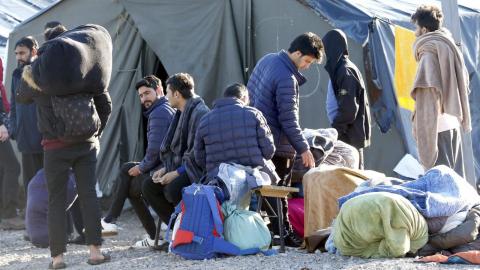 The migrant-smuggling business in Western Balkan countries is worth at least 50 million euros a year, the Global Initiative Against Transnational Organized Crime NGO said in a report published on Monday.

The report assesses the money being made by smugglers in the three key smuggling zones in the Western Balkans - the borders between Greece's borders with North Macedonia and Albania; the border between Bosnia and Herzegovina and the EU in Croatia, and Serbia's borders with Hungary and Romania.

However, it says that the amount being made could be even higher, as some migrants travel to the EU by other means, such as from Albania to Italy by boat.

According to the report, the first major smuggling zone is where most migrants and asylum-seekers enter the Western Balkans - from Greece, either around Gevgelija in North Macedonia or near Kakavia and Kapshtica in Albania.

"In total, in 2020 the migrant-smuggling business at the main entry points to the Western Balkans at the borders between Greece and neighbouring North Macedonia and Albania can be estimated to be in the range of €19.5 to €29 million," the report says.

The second major smuggling zone is in Bosnia and Herzegovina, "particularly around the city of Bihac in Una-Sana canton", it continues.

"Our estimate is that the market in this region was worth around €7 million to €10.5 million in 2020, the vast majority of which was generated in Una-Sana canton," it says.

The main hotspots for migrant-smuggling in the third zone at the Serbian border are "Horgos, the area around Subotica, Sombor, tunnels in the Kelebija area and across the Tisza River for those people moving east towards Romania and then back into Hungary".

"The estimated value of the market in this...

Romania's SARS-CoV-2 daily case count rises by 69; tests performed in last 24 hours: around 16,000
Energy Minister: EIB can finance up to 75 pct of Romanian eligible energy project costs
Citu: PNRR was not rejected; officials who superficially deal with this project go home
Ciolos: European Commission's approach to PNRR not that of checkbox-ticking evaluator, but of a partner
MEP Corina Cretu: I don't believe any PNRR will be rejected by the European Commission