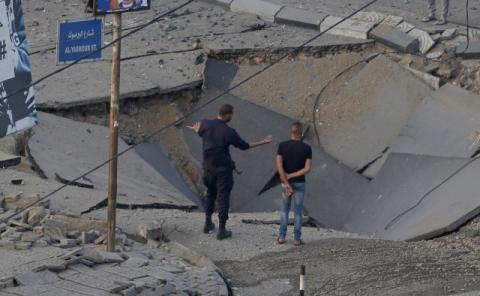 Israel has promised to continue targeting Islamist factions in Gaza, despite US President Joe Biden's prediction that their conflict could end soon.
The General Staff of the Israeli Defense Forces will consider today the approval of a possible ground offensive on the Gaza Strip, Hidai Zilberman, spokesperson for the Israel Defense Forces, stated.
There was no direct information about the victims of the missile attack, as sirens sounded all the way to northern Nahalal, 100 kilometers from Gaza, due to which thousands of Israelis had to go to shelters, Reuters reports.
Israel launched rockets at the northern city of Gaza this morning. According to the Al-Jazeera TV channel, air strikes were carried out on the Sheikh Radwan district, and the bodies of two people were found under the ruins of a collapsed house. At least 67 people have been killed in Gaza since Monday when the situation escalated, the Gaza Strip health ministry said.
Seven people were killed in Israel, Israeli health officials confirmed.
The exchange of rocket strikes between Israel and Palestinian radicals from the Gaza Strip followed the outbreak of unrest near the Al-Aqsa Mosque in Jerusalem's Old City in early May. Clashes between Palestinians and Israeli police were sparked by an Israeli court ruling on the occupation of apartment buildings.

#Israel was preparing ground troops along the #Gaza border on Thursday and Hamas launched rocket barrages at southern Israel as the fiercest hostilities in years dragged on with no end in sight.#Palestine https://t.co/wdzIt0GNrR

US deploys F-18 fighters to Saudi Arabia amid escalating violence in Mideasthttps://t.co/JW1PTJkNQL