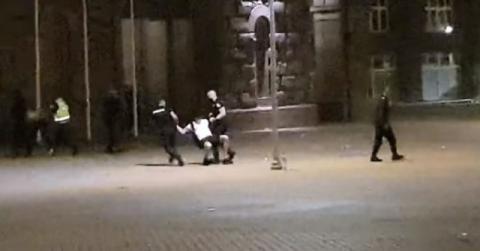 The Council of Ministers' proposal to President Rumen Radev to relieve Chief Commissioner Ivaylo Ivanov of his responsibilities as Secretary General of the Interior Ministry, has been made because of Ivanov's violation of core principles of the Interior Ministry's work in the form of failure to respect and guarantee citizens' rights, freedoms and dignity, as well as of lack of objectivity and equity.

Ivanov has thus damaged the Interior Ministry's image in the eyes of both its employees and society, reads the reasoning for the caretaker Cabinet's proposal published in the Information System for Legal Information of the Council of Ministers on Saturday.
The reasoning for the proposal, which the Council of Ministers made late on Friday, also reads that Ivanov bears responsibility for the Interior Ministry's actions amid last year's protests "against the growing corruption and lawlessness in the country's governance".

While neutralizing the protests, which began on July 9 and continued until the end of 2020, the Interior Ministry employees made mistakes of organizational and tactical nature.
Despite Ivanov's claims that the police operation was "perfectly organized" and "professionally handled", on the evening of September 2, 2020 the tension between the law enforcement bodies and the protesters in Sofia escalated and clashes were allowed to happen, the reasoning reads further. Affected to a various degree were persons with an aggressive behaviour but also peacefully protesting citizens and journalists.
September 2, 2020 marked the 56th consecutive day of anti-government protests demanding the resignation of the Boyko Borissov Cabinet and of Prosecutor General Ivan Geshev. In the evening the protest in Sofia culminated around the building...

National Protest on Tuesday to Block intersections and Border Crossings, Will Stop Buses

Prof. Mutafchiiski Had a Third Dose. When and in Which Groups is it Recommended?

Historical Discovery: America was Reached by Humans 7,000 years ago

Census 2021: Nearly 2 million have been Counted Online, the Deadline can be Extended Again

COVID Ward in One Sofia Hospital is Full. Only One of the Patients was Vaccinated