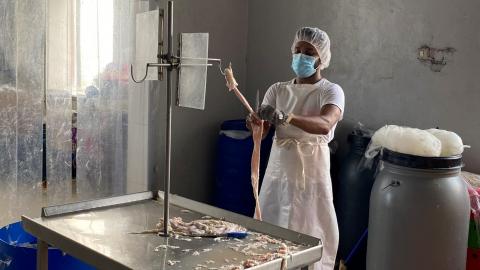 Haque is one of 10 Bangladeshi workers employed by the INCA factory in Lezha. The manager says Albania no longer supplies enough labour, forcing him to seek workers far away.

"I plan to stay here for a long time because I have no other solution," Abudalep, 28, another Bangladeshi migrant employed at the INCA factory told BIRN. "In my country there is no work," he adds.

"The need for bread obliges us to come in Albania. We need to provide for our families," he continues.

"We have expanded, so we need more workers," Iris Gruda, a manager at the company, told BIRN. "But we were unable to recruit people here," she adds.

It is an unexpected situation. Albania is still one of the poorest countries in Europe. But its economy had grown fast over the last three decades, fueled by remittances from emigrants to richer neighbouring countries, such as Greece and Italy.

Its GDP per capita of some 4,800 euros, however, is more than twice higher than that of Bangladesh, a country of 163 million people. According to the International Labor Organization, ILO, some 400,000 workers migrate from Bangladeshi each year to find a living.

Albania's Prime Minister Edi Rama caused controversy after suggesting in the campaign ahead of the 25 April parliamentary elections that local workers have become "lazy", so the only solution is to find workers abroad, in countries like Pakistan or Bangladesh.

"We have a fast procedure, lasting just seven days, to employ foreigners," Rama told the owner of a sweatshop factory in northern Albania. "With the money you are offering, it would be easy to get them [workers] from Bangladesh, Pakistani or India," Rama added.

"When they start to learn...

Illegal migration down by 40% in first seven months y/y