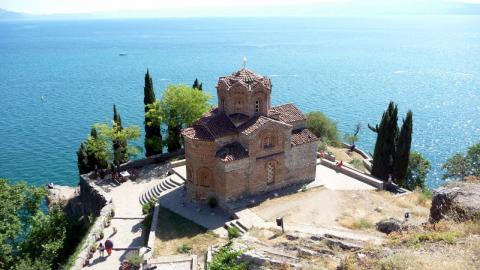 The UN cultural organisation, UNESCO, on Friday gave North Macedonia two more years to take action to properly protect the heritage of the lakeside city of Ohrid and its surroundings - or be added to the list of World Heritage Sites in Danger.

The decision was reached at the 44th session of UNESCO's World Heritage Committee in Fuzhou, China. It also refers to neighbouring Albania, which shares a smaller part of the protected Ohrid lake basin with North Macedonia.

This is the second time since 2019 that, at a session of the Committee, an initially tougher expert report on the protected site has been amended to give North Macedonia more time to deal with the issues.

As in 2019, the initial report presented to the Committee threatened to put Ohrid and the surrounding area immediately on its list of endangered heritage sites, citing persistent uncontrolled urbanisation and illegal construction, which "had eroded the authenticity and integrity" of the site.

This viewpoint was shared by Norway, Bahrein and Australia.

The town of Ohrid, which sits beside the deepest and oldest lake in the Balkan semi-peninsula, is one of only 28 sites across the world that UNESCO has named a world heritage site in both the culture and nature categories.