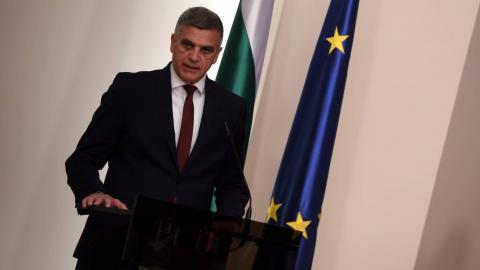 Bulgarian interim Prime Minister Stefan Yanev will remain on his position until the next government. Sofia, Bulgaria 12 May 2021. Bulgarian President Rumen Radev named Stefan Yanev as the new Prime Minister of a caretaker government that is to lead the country to early elections for parliament on 11 July , and until a regular government is formed. EPA-EFE/VASSIL DONEV

Radev congratulated the current interim cabinet and criticised the lack of dialogue in the parliament: "The caretaker government proved a successful example, a step forward in overcoming the political prejudices that are blocking the development of the country," he said.

"Unfortunately, the political class did not accept the model of the caretaker government and society's pleas," he added.

The cabinet is similar to the one appointed in May, with Stefan Yanev, advisor to President Radev, remaining Prime Minister. "If we work in the same spirit we worked in so far, we can keep a stable system," Yanev said later, and warned that "tough months" lie ahead.

At the time of the President's announcement, Petkov and Vassilev confirmed that they'll be forming a party of their own. "We're entering politics; we'll be part of the political life," Petkov told the media on Thursday. "There won't be any ideology imposed, we'll gather only people with clear reputations," he added.

Petkov and Vassilev, both Harvard-educated, enjoy high reputations after being enthusiastic about reforming local structures.

Vassilev offered a revision of the state budget, which would...