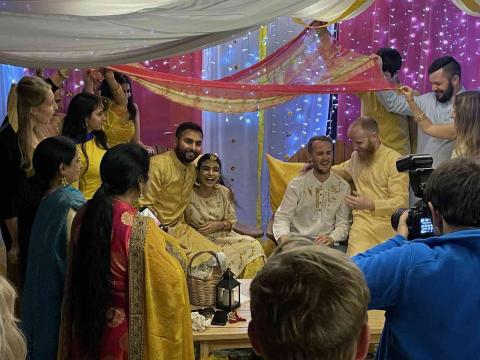 A British groom and an Indian bride, who have become the latest foreigners to choose Turkey as their wedding destination, have tied the knot in a 48-hour-long wedding ceremony held in the southwestern province of Muğla.

However, Alex Hampson, 30, and Jas Pavit, 25, differed from all foreign couples by choosing the rural district of Menteşe instead of the world-renowned tourism hotspot Bodrum.

Based on their cultures, the couple got married after performing two different wedding ceremony rituals held in two days.

"We hosted the couple and their 50 guests in a valley in the Yenice neighborhood, which has no connection to the Aegean Sea. This is a first for Menteşe," Çağlar Bozkurt, the business owner who organized the ceremonies, told the Demirören News Agency.

"We decorated two different locations, one based on British and the other on Indian traditions," he added.

Some 600,000 wedding ceremonies are held annually in Turkey, constituting a wedding business of some 100 billion Turkish Liras ($7.2 billion). The exact numbers of foreign weddings are unknown.

"We expect that 2022 will be the year foreign couples, especially from Russia, Lebanon, India, Afghanistan, Iran, Pakistan and Middle East, will prefer Turkey to marry," said Heval Zengoğlu, an interior decorator who decorates wedding halls.