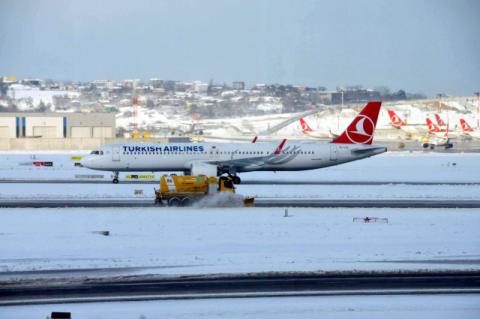 Greece and Turkey are frozen by snowfall, as in the southern neighbor of Bulgaria today is a non-working day, and in the southeast neighbor, the snow has severely affected road connections by land and air.

Yesterday, snow covered parts of the Acropolis hill in Athens, and bus and rail transport are down. Hundreds of drivers were in distress on the ring road and rescue teams had to intervene, and Greek media showed soldiers giving food and water to distressed citizens, Reuters reports. This is the second year in a row with unusually heavy snowfall in Athens - otherwise an unusual phenomenon for the Greek capital.

Almost all flights of the Greek carrier Aegen Airlines were canceled yesterday, problems with the schedule are expected today. 15 passengers were also reported injured in an attempt to pull a train stuck in the snow in central Greece. Two are in serious condition.

In Greece, today is a non-working day. Earlier, Attica and the nearby Evia (Euboea) region, as well as islands such as Crete, closed government offices, schools, banks and all non-essential stores. the decision spread across the country due to the expectation of bad weather to continue to create transport chaos.

The busiest airport in Europe and one of the most important transit hubs in the world will remain closed at least until noon. The roof of one of the cargo terminals collapsed under the pressure of the snow last night, but no one was injured.

The situation at the airport has prompted critics of President Recep Tayyip Erdogan to point out that they have long questioned the idea of ​​building it on a site off the Black Sea coast...