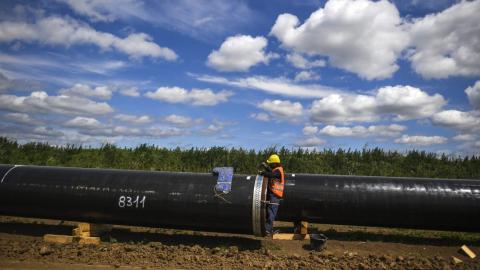 Poland and Bulgaria said Russian energy giant Gazprom's decision to halt natural gas supplies to them won't cause unbearable problems as they either have enough gas stored, or have alternatives to draw on.

Polish Prime Minister Mateusz Morawiecki called Gazprom's move "a direct attack on Poland, revenge for the sanctions we imposed", in relation to the Russian invasion of Ukraine.

"Cutting gas supplies is a breach of contract and PGNiG reserves the right to seek compensation and will use all available contractual and legal means to do so," Poland's state-owned energy company PGNiG said.

Russia covers about half of Poland's gas needs, which comes via the Yamal pipeline running from the Artic to Europe. Nevertheless, Poland said its gas stores were 76 per cent full and it did not need to use any reserves as yet.

Poland was pursuing a strategy of moving away from Russian gas dependency even before the war in Ukraine started and has been pushing the EU to take more steps in this direction since the invasion.

Poland plans to become independent of Russian gas by the end of 2022, when its current contract with Gazprom expires. Warsaw was intent on not renewing it.

It intends to replace Russian gas with imports from Norway via the Baltic Pipeline. It is also in the midst of expanding its LNG terminal at Swinoujscie, where LNG from the US and the Middle East is brought in, from 5 to 7.5 billion cm.

Bulgaria Has Enough Gas 'for at Least a Month'

Terrain is being cleared and pipes are being prepared at Houstrup Strand, at Noerre Nebel, Denmark, for upcoming Baltic Pipe gas pipeline, February 2021. Photo: EPA-EFE/John Randeris DENMARK OUT