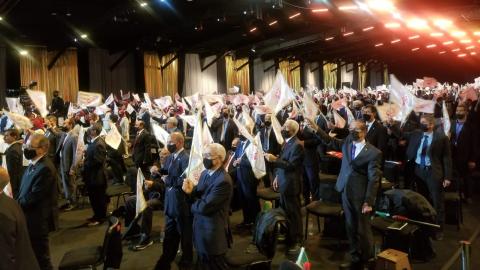 In a ceremony that lasted around two hours on Thursday, in high-security measures and with the attendance of Albanian politicians from all main political parties, former US Vice President Mike Pence talked to members of the MEK, voicing his support for the Iranian dissident group.

He called the Iranian regime a "brutality" and criticized current US President Joe Biden for his softer policies toward Iran and urged the US not to renew a nuclear deal with Tehran.

"It is a great honour for me and my wonderful wife to be here at Ashraf 3 [camp] and Albania, where the eternal flame of freedom in Iran burns bright," Pence said.

He added that he had travelled 5,000 miles from his home in Indiana because he shared the same cause - "the liberation of the Iranian people from decades of tyranny".

Pence criticized the Biden administration and called for the US "to immediately withdraw from all nuclear negotiations with Tehran, voice support for the organized opposition in Iran, and make it clear that America and our allies will never permit the regime in Tehran to obtain a nuclear weapon".

He considered MEK "an alternative" against the Iranian regime.

"One of the biggest lies the ruling regime has sold the world is that there's no alternative to the status quo. But there is an alternative — a well-organized, fully prepared, perfectly qualified and popularly supported alternative," he said.

Pence is not the only high-profile official from Donald Trump's former administration to have visited and supported the MEK camp. Mike Pompeo US Secretary of State under Trump, visited the MEK camp in May this year.

Pence also visited a museum in the camp, in honour of people who have been killed in Iran since the Islamic regime came to...