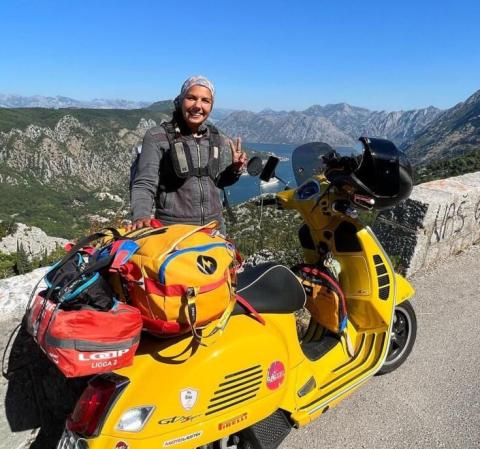 A Turkish woman who previously traveled around Türkiye alone has visited 10 European countries on a Vespa scooter.

"Due to my limited budget, I usually camped in tents. I realized that I could dream big with a small budget. Besides, I do not know English," Yüksel explained, expressing her motivation.

"Everyone should hit the road without worrying about anything," she added.

Pointing out that she could not ride her scooter for two years during the pandemic, Yüksel noted that though she was not prepared at all for the journey, it started with a bag including only five T-shirts and some clothes.

"I set out with some camping gear. I went to Italy by ferry from Greece. I stayed for one and a half months. From south to north, I saw the Amalfi coast, Rome, Portofino and the Italian Alps. Then, I headed to Balkan counties," she explained.

Expressing that even though the return journey took a month, she was surprised that she was able to make the entire journey on a small scooter with 125 cc capacity, Yüksel noted.

"Traveling has no gender. Courage is a concept that every Turkish people has. After taking the first step, you see that it is easy to travel and ride a motorcycle," she pointed out.

When Yüksel was only 17 years old, she went to Antalya from Istanbul alone as soon as she got her driver's license in 2014.

After visiting the Mediterranean and Aegean coasts, on her second trip in 2015, she visited the Black Sea,...