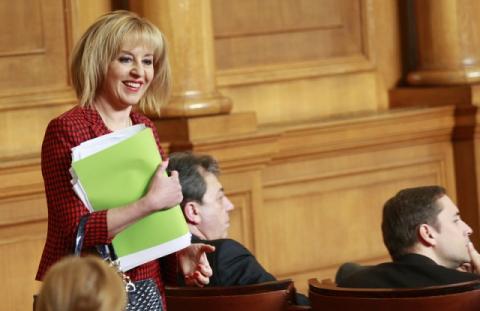 The Bulgarian Socialist Party is ready to join a "grand coalition" including all parties to the left, a socialist lawmaker has said.

Maya Manolova, who was at the spearhead of the formerly ruling BSP's legislative moves in the previous Parliament, is now known for her dissension with some of her party's main policy lines.

Her words suggest the BSP should seek an alliance with President (2002-2012) Georgi Parvanov's splinter-off party Alternative for Bulgarian Revival (ABV), which is now in the government, while socialists chose in November 2014 to remain in opposition as the cabinet was being forged.

Manolova's comments also follow the recent announcement by the BSP's local structure in Sofia, which offered to join hands with ABV for the local elections if the latter decided to quit the cabinet.

The BSP, which was the senior partner in Bulgaria's previous elected government, has been undergoing a crisis since the European Parliament vote on May 25, 2014.

Its long-standing leader Sergey Stanishev stepped down in July, with Mihail Mikov taking over after a delegate vote in which Manolova herself was a contender.

For his part Parvanov, who was Stanishev's predecessor at the helm of the socialist party, extended last week his hand to BSP for "reconciliation" and "dialogue", though Mikov has described his move as an attempt at destabilizing the socialist party.

Parvanov was expelled from the BSP in 2014 after announcing earlier the same year that ABV, back then still a movement, would run on a separate ticket in the EU elections.