Russia, US to Hold Talks on Coordinating Airstrikes in Syria 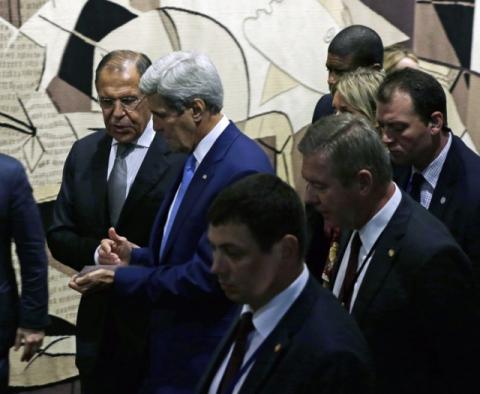 Flanked by security, Russian Foreign Mininster Sergey Lavrov (C-L) and US Secretary of State John Kerry (C-R) are seen leaving an impromptu joint press conference on the situation in Syria outside of the Security Council chamber during the 70th session of

Russia and the US will hold talks "as soon as possible" in order to avoid clashing in Syria after Moscow launched airstrikes against Islamic State (IS) targets on Wednesday.

This became clear after a meeting between Russian Foreign Minister Sergey Lavrov and US State Secretary John Kerry.

Lavrov pointed to the need to establish channels of communication in order to avoid unintended incidents, while Kerry said that such talks will take place possibly on Thursday, the BBC informs informs.

According to Russian defence officials, their aircraft conducted about twenty missions against IS after the Russian Federation Council had authorised the use of military force in Syria earlier on Wednesday.

However the US has expressed concern that the targets are not only IS, but also other opponents of the regime of Syrian President Bashar al-Assad, who is backed by Russia.

NATO stated that there has been little coordination between Russian and the US-led coalition against IS, while the US said that it was informed of the Russian airstrikes only an hour before being launched.

The New York Times and the Wall Street Journal report that rebels supported by the US have been targeted by the Russian airstrikes.

Activists of the Syrian opposition claim that Russian airstrikes hit towns, such as Zafaraneh, Rastan and Talbiseh, which are in areas not controlled by the IS.

According to them, this has resulted in the death of 36 civilians including children.

The US is not opposed to Russian...