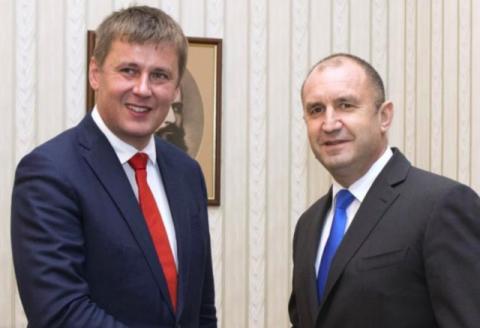 Bulgaria and the Czech Republic will deepen their cooperation to defend common stances on important for the two countries topics on the EU agenda. This is what emerged at the meeting between Rumen Radev and the Czech Foreign Minister Tomas Petricek, who is visiting Sofia. The cohesion between East and West Europe, overcoming the double standards in the EU, and the active participation of all countries in making decisions on the future of Europe are of key importance both for Bulgaria and the Czech Republic, the presidential office reported.

Rumen Radev and Tomas Petricek were unanimous that the two countries enjoy a very good partnership in united Europe, and also excellent bilateral relations based on strong historical and cultural ties. The top-level political dialogue is of key importance and will be continued with the forthcoming visit of Czech President Milos Zeman in Bulgaria at the invitation of President Rumen Radev. The visit is planned to take place in 2020, when Bulgaria and the Czech Republic will mark 100 years since the establishment of diplomatic relations.

At the meeting President Radev was assured that the Czech Republic will support Bulgaria's efforts to achieve full European integration - the country's accession to Schengen, the Organization for Economic Cooperation and Development, and also lifting the Cooperation and Verification Mechanism.

The Bulgarian President and the Czech Foreign Minister were unanimous that the European prospects of the Western Balkan countries is of crucial importance for the stability and security in the region. It is essential that Albania and the Republic of North Macedonia should launch accession negotiations, which will encourage the two countries to meet the EU membership criteria, to conduct...