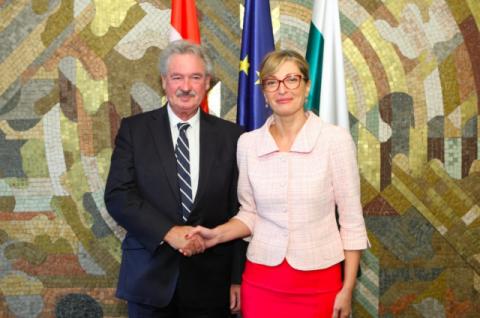 "If we join forces and help the Republic of Northern Macedonia and Albania start negotiations, we will not only help them and their people, but we will help the whole Europe," said Minister Zaharieva, who received Jean Asselborn at the Foreign Ministry's first official bilateral visit.

The European integration of the Western Balkans, which both countries support, was one of the main topics of the discussion.

According to Ekaterina Zaharieva, the accession of these countries to the EU will also help for one of the biggest problems in the Western Balkans region - the emigration of young people. For example, three percent or almost 60,000 of the Albanian population left the country last year.

"Europe has made a big mistake by not agreeing to open negotiations with the Republic of Northern Macedonia and Albania at the last European Council. This is really not good. We will do our best so that the EU does not forget the Balkans. Back in 2003 at the Thessaloniki summit, we said that all countries in the Balkans should be able to become EU members by fulfilling the necessary conditions, "said Jean Asselborn.

Luxembourg and Minister Asselborn personally were some of Bulgaria's biggest supporters during her first European Presidency in 2018, including on the priority for European integration in the Western Balkans.