"Another uncivilized attack in Belgrade" 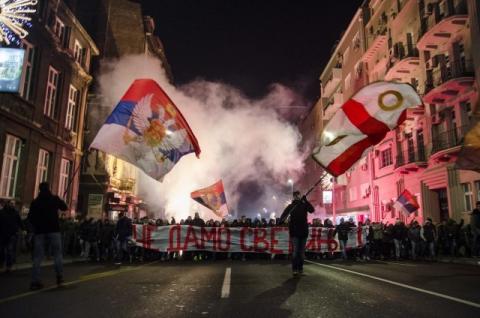 Montenegrin Prime Minister Dusko Markovic said it was "another uncivilized attack on the Montenegrin Embassy and the Montenegrin flag".
"Last night in Belgrade, another uncivilized attack on the Embassy of Montenegro and the Montenegrin flag took place. The relationship between the Serbian authorities was staggering, while Montenegro was facing another challenge of defending its independence and freedom. We will preserve our Montenegro in spite of the hatred that is engulfed by the same actors inside and outside its borders!", Markovic said on Twitter.
On Thursday night, after a basketball game at which Red Star beat Bayern Munich at Stark Arena in New Belgrade, they came in large numbers in front of the Montenegrin Embassy in Knez Mihailova Street, protesting the adoption of the Law on Freedom of Religion in Montenegro.
They invited other cheerleading groups to join them and gather on January 17 to protest that some of them announced for that date.
Fans fired pyrotechnics in front of the Embassy building on the higher floors of the Embassy premises, repeatedly firing fireworks at the Montenegrin flag located on the top floor of the building.
They carried a banner with the image of Njegos, and before leaving the entrance of the building, they pushed a banner on which it was supposed to read "Montenegro and Serbia - a family", but the police did not allow us to come closer and see if that was the banner that was displayed on the grandstand during the match.
They shouted: "Milo - Shqiptar, we do not give you our holy places!", "Montenegro and Serbia - one family", they sang "God of Justice" and "There, Far Away", shouting "AV-AV!".