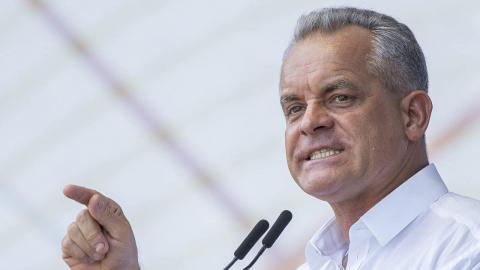 "Today's action sends a strong signal the United States does not tolerate corruption and stands with the people of Moldova in their fight against it," US Secretary of State Mike Pompeo said in a statement.

The former head of Moldova's Anti-Corruption Prosecutor's Office, Viorel Morari was placed in custody on Monday afternoon for 20 days.

Morari is suspected of having acted in the interest of the former leader of the Democratic Party, Vlad Plahotniuc, in order to protect him from involvement as a suspect in a bank fraud case.

But Morari claimed that his detention is connected to a file related to Russian financing of the Moldovan Socialist Party, which he is investigating.

He alleged that he was arrested at the political behest of Socialist President Igor Dodon.

Until June 2019, when he left Moldova after the fall of the Democratic Party administration led by Pavel Filip, Plahotniuc was considered the most powerful man in the country.

He is now wanted by the Moldovan authorities on corruption charges.

"The sanctions against the oligarch who fled the country are a good and expected signal from Western partners, for which we are grateful. I have repeatedly addressed them, including directly in the United States, with such a request," Dodon told Russian news agency TASS on Tuesday.