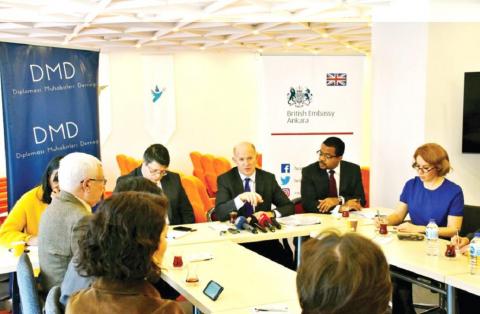 The Ankara Agreement and Customs Union with Turkey will continue during the Brexit transition period of 2020, and the two countries will work to sign a bilateral free trade agreement to be put into effect as of Jan. 1, 2021, British Ambassador to Ankara Sir Dominick Chilcott said on Feb. 7.

The most crucial issues regarding Turkish citizens after Brexit in the United Kingdom are regulating the bilateral trade and the rights of Turkish citizens living in this country granted by the Ankara Agreement. The visa scheme issued by the U.K. government to Turkish businesspeople and their families was based on the 1963 Ankara Agreement between Turkey and the European Economic Community, a predecessor to the EU. It has been in use by Turks who came to the U.K. to establish new businesses.

"After the end of the transition period, the end of this year, we will be no more in the EU and we will no longer be a party for the Ankara Agreement. The provisions of the agreement will not apply to us. What we need to do is to find the right provisions to have in its place," Chilcott said at a meeting with Diplomatic Correspondents' Association.

"I think this is an advantage for Turkey. The principle behind it is that this is a global system. It does not matter whether you come from Germany, Turkey or Australia, everybody gets the same treatment according to the qualifications that they have under the point-based system," he said.

As long as the U.K. was an EU member state, the country was...