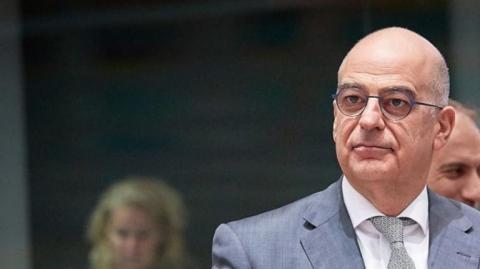 Even as Turkey is escalating its aggressive acts in the Eastern Mediterranean, Cyprus' EEZ, Libya, and the Aegean, Foreign Minister Nikos Dendias declared after a meeting today of the National Council on Foreign Policy that there is a consensus between the government and opposition parties on the management of crucial national issues and in particular Greek-Turkish tensions and the protection of Greece's sovereignty.

"In spite of individual assessments there was consensus on the fundamental observations, as well as solidarity and responsibility among the political forces. This is the most important resource in the country's diplomatic arsenal," Dendias declared.

The foreign minister briefed opposition parties on "Turkey's provocative actions and on its historically and legally groundless claims."

"I explained that Greece remains committed to maintaining open channels of communication [with Ankara]."

Shuttle diplomacy to neutralise Turkey-Libya accord

Dendias briefed the representatives of opposition parties on Greece's diplomatic moves to marshal an opposition front against the Ankara-Tripoli EEZ accord that expropriates and cuts through large chunks of Greece's maritime Exclusive Economic Zone.

He has visited Rome which has a longstanding relationship and colonial history in Libya for talks with his Italian counterpart Luigi Di Maio with whom he concurred on the illegality of the Tripoli-Turkey deal.

Dendias says he expects Italy to sign on to the EastMed gas pipeline project which has brought together Greece, Cyprus, and Israel (and the US with the passing of theEastMed Act). The gas pipeline if constructed would scuttle Ankara's expropriation of...