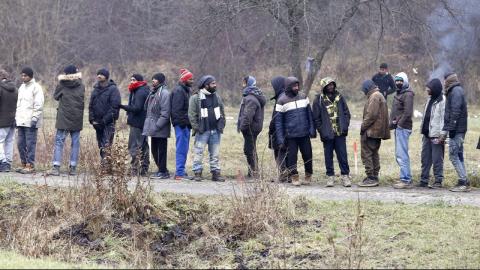 Bosnian officials fear the crisis on the Greek-Turkish border could create more problems for the country, which is already struggling to handle growing numbers of migrants.

"Given the situation on the Turkish-Greek border when it comes to migrants, we can expect an escalation here, and we need to cooperate with each other to readily address possible problems," Dragan Lukac, Interior Minister of the Serb-led entity Republika Srpska said on Friday after meeting Fahrudin Radoncic, the Bosnian Security Minister.

Border police say there is already increasing pressure from citizens of high-migration countries, especially from the direction of Serbia and Montenegro, which is complicating the situation.

Franka Vican, a spokeswoman for the Border Police, said a rise in the number of irregular migrants coming from Turkey would put severe pressure on them. "We lack over 1200 police officials to effectively cover about 600 kilometres of the border with Serbia and Montenegro," Vican told BIRN.

"We have agreed that we need to strengthen the capacity of the Border Police, which requires funds, and have initiated some actions to raise money for at least 400 more border police, but we are lacking as many as 1,200," Radoncic said on Friday.

"Bosnia and Herzegovina cannot accommodate new migrants because there are already between 6,000 and 7,000 on its territory, and its capacity is twice as little as that," he added.

According to Radoncic, a new wave of migrants would be a disaster.

"Bosnia does not need to be a parking lot for migrants. The EU, especially after the Greek-Turkish major dispute, needs to respond and jointly protect not only its borders but also all other countries, so that migrants do not move towards Serbia, Montenegro and...