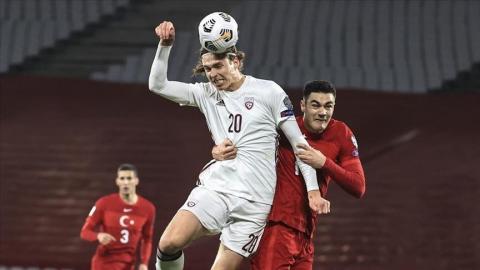 Turkey scored the opener in the second minute as Kenan Karaman found the net with a left-foot strike in the area.

In the 32nd minute, Turkish left back Caner Erkin fired with his left foot to hit the crossbar. But a minute later, Turkish midfielder Hakan Çalhanoğlu's low shot outside the penalty area beat Latvian goalkeeper Pavels Steinbors, giving Turkey a 2-0 lead at the Atatürk Olympic Stadium in Istanbul.

Latvia narrowed the gap in the 35th minute to one as midfielder Roberts Savalnieks scored on a counterattack.

Savalnieks' shot hit the far post before going in.

Turkey led the first half 2-1.

In the early minutes of the second half, Turkey were awarded a penalty kick as Turkish defender Mert Müldür was fouled in the area.

Burak Yılmaz converted the penalty successfully in the 52nd minute to make it 3-1 for Turkey.

But Latvia didn't give up, making it 2-3 in the 58th minute as forward Roberts Uldrikis, who was unmarked, finished with a close range shot. Turkey appealed for an offside, but the goal was valid.

The Latvians leveled the game in the 79th minute as forward Davis Ikaunieks controlled the ball lofted in the area and then took a low shot to score the equalizer. Ikaunieks was onside to score the goal.

Latvia clinched the 3-3 away draw, returning home with a point.

Turkish President Recep Tayyip Erdoğan was in the stadium to watch the match.

The Netherlands, Montenegro and Norway have 6 points each in three matches.

Latvia bagged their first point in the group.<...