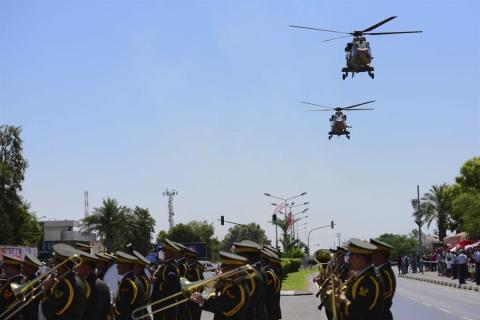 The Turkish Cypriots, with the participation of a Turkish delegation headed by President Recep Tayyip Erdoğan, on July 20 marked the 47th anniversary of the Cyprus Peace Operation launched by the Turkish Armed Forces to bring peace and safety to the island and the Turkish Cypriots who had suffered years of persecution.

Every year, Turkish Cyprus celebrates July 20 as Peace and Freedom Day to mark the operation -- a large-scale military intervention to protect the Turkish Cypriots from the violence that struck the island in 1974.

Addressing the ceremonies, Erdoğan said peace talks on the future of Cyprus could take place only between "the two states" on the Mediterranean island.

"The new negotiation process can only be carried out between the two states. We are right, and we will defend our right to the end," he said.

The Greek Cypriots could not wake up from the "ignorance of seeing the Turkish Cypriots as a minority and rejecting a solution based on equality," he said, adding that the Greek Cypriot side insists on maintaining its "maximalist, insincere and spoiled approach that is disconnected from reality.

Erdoğan noted that the Cyprus dispute was damaging Turkey's relations with the European Union and Greece. He recalled that Greek Cyprus rejected the "Annan Plan" for the reunification of the island, and then the EU had promised to support the Turkish Cyprus, which welcomed the same peace plan at a referendum in 2004. "I call on the European Union: Have you kept your promises?" he asked.

On the Varosha (Maraş) town of the island, which was partially reopened to the public in 2020 after 47 years, Erdoğan said the opening would be carried out with utmost attention to property rights.

The ghost resort was the...