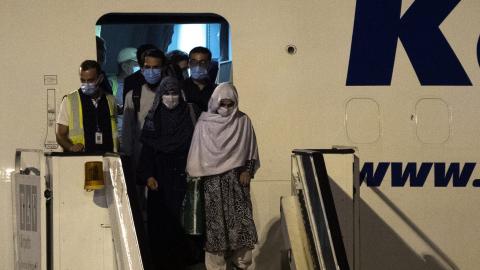 The NGO activists urged the Montenegrin government to "enable anyone who is on its territory to express their intention and apply for asylum, in accordance with the procedure provided by the [Montenegrin] Law on International and Temporary Protection of Foreign Citizens".

"This obligation has recently been announced by reference international organizations, such as the UNHCR, which have called on states to leave borders open to asylum seekers from Afghanistan and to impose a moratorium on the return of Afghans to other countries," they said in a statement.

On August 18, the Foreign Ministry said that Montenegro is not obliged to temporarily accept people from Afghanistan who helped NATO forces, even though the government co-signed a statement in which some 60 countries called on the Taliban "to respect and facilitate the safe and orderly departure of foreign nationals and Afghans who wish to leave the country".

However, the Foreign Ministry told Vijesti newspaper on Monday that Montenegro was not asked to accept any Afghan refugees.

"Therefore, Montenegro was not in a position to refuse at any time, nor, ultimately - as it was interpreted and understood by some section of the public - to ignore international conventions," the ministry said.

"Prior to a possible decision on the temporary reception of refugees, detailed analysis and consultation of state bodies and the relevant services is necessary, as well as special preparation at all levels," it added.

Other Balkan states have already taken in Afghan refugees on a temporary basis.

On Tuesday, 149 Afghans were flown in to North Macedonia's capital Skopje,...