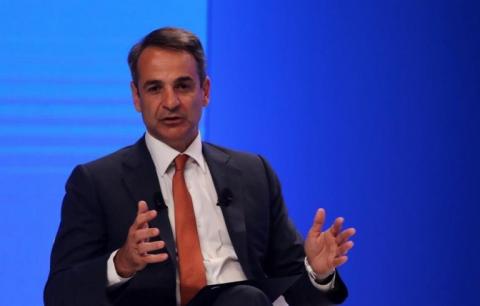 Prime Minister Kyriakos Mitsotakis laid out his political credo with a focus on liberal democracy - the term New Democracy uses to describe itself - and his view of the role of the state, political discourse and consensus, populism, public-private partnerships, linking tertiary education with the market, and the value of patriotism, in an article published in the Sunday edition of the newspaper Kefalaio (Capital).

While not naming SYRIZA, much of his article was devoted to indirect but sharp criticism of the left and of its past ideological hegemony. Though none of the stated political principles and objectives of the ruling conservatives is new, he created a mosaic that essentially expresses his vision and blueprint for the country's future.

The PM underlined the need for common values with the first being co-existence.

"No one has a monopoly on ideas, the truth, social sensitivity, morals, and patriotism," he said, in a thinly veiled reference to the Left.

"The road may be creative disputes, disagreements, or even clashes, but the destination must always be compromise and synthesis, with absolute respect for a different viewpoint, but without the slightest concession to divisive and bigoted rhetoric," he said.

The PM, however, recently told Parliament that there is no common ground for dialogue with SYRIZA - which he accuses of extreme populism - and that the government is essentially prepared to go it alone.

Noting his dedication to "the power and depth of an open liberal parliamentary democracy", he said that, "As Greece's experience has proven it is the form of government that can transcend economic crises and demagogic...