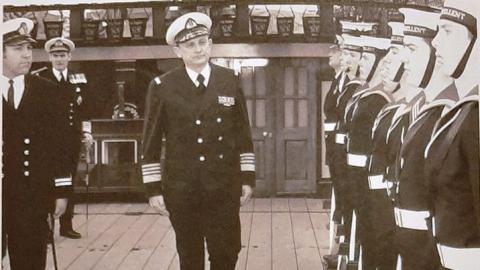 After World War II, Mamula attained the rank of Admiral of the Fleet in the Yugoslav Navy and Chief of the General Staff of the Yugoslav People's Army. From 1982 to 1988, he was also defence minister of Yugoslavia.

During the 1990s wars, he moved from the Croatian coastal town of Opatija to Montenegro. As part of Yugoslavia, Montenegro took part directly in the wars in Croatia and Bosnia and Herzegovina under the leadership of Slobodan Milosevic, although it saw no conflict on its own soil.

On July 22 this year, Montenegrin President Milo Djukanovic awarded Mamula with the Order of the Montenegrin Flag for his contribution to the anti-fascist movement in World War II and to the development of Montenegro.

"Montenegro became Mamula's second homeland, after the disintegration of the former Yugoslavia. He made a great contribution to the development and progress of Montenegro. He also remained true to the best values ​​from the time of the anti-fascist struggle and the socialist construction of Yugoslavia," said Djukanovic.

In an interview with Montenegrin public broadcaster RTCG in February 2015, Mamula said that in the early 1990s, Yugoslavia could have been saved by a Yugoslav People's Army military coup. He accused the army's leadership of allowing nationalist and separatist movements to develop in the country.

"It is difficult to judge what would have happened, but there would certainly not...