Over 100 migrants pushed back by Greece rescued 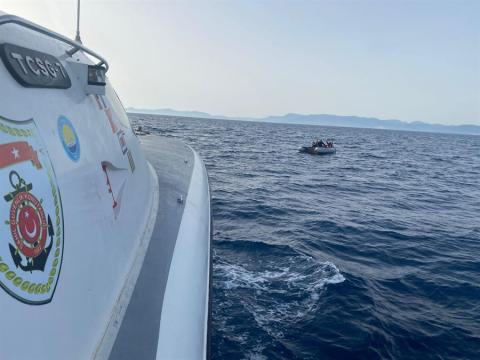 The Turkish Coast Guard has saved more than 100 irregular migrants pushed back by Greek authorities off the Çeşme, Menderes and Foça districts in the Aegean province of İzmir.

According to a statement from the Coast Guard, the first group, consisting of some 76 people, was saved on April 22. Another group of 32 people was rescued the day after.

On April 25, the security units identified a rubber boat floating off the Çeşme coasts. While approaching the boat, security officers saw some 31 migrants trying to reach Greece.

"Some 108 migrants pushed back by Greece and 31 asylum seekers nabbed were delivered to the provincial migration office," the statement said on April 26.

The number of pushbacks by Greece increased by 97 percent in 2021, compared to the previous year, according to a survey by a Norwegian nongovernmental organization.

"Since 2020, 30,000 people have been pushed back by Greek authorities in the Aegean Sea," the Aegean Boat Report said in its latest survey.

Ayselin Yıldız, an academic from Yaşar University, who examined the report, said, "In 2021, only in the Aegean Sea, the number of Greece's pushback cases was 629."