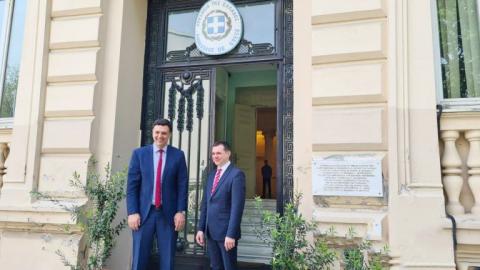 The messages from the new agreements reached by the Minister of Tourism Vassilis Kikilias during the successive meetings he held in Bucharest with Romanian tour operators were optimistic and very promising.

In a statement, Mr. Kikilias stressed that there is a large increase in the places and destinations chosen by Romanian travelers, while their interest is in alternative tourism, in which our country has invested, with Pieria, its islands, the Ionian, Evia and Thassos being very high among their preferences. This seems to have facilitated the suspension of restrictive measures for the pandemic and road tourism has already begun.

The Minister of Tourism stated that in order to deal with the impact of the Ukrainian war on tourism, another roadshow has already been planned in the affected countries, such as Romania, as the ties of the Balkan countries with Greece are strong and this is reflected and in tourism.

In addition, Mr. Kikilias had a meeting with the Deputy Minister of Entrepreneurship and Tourism of Romania Rus Lucian Ioan, who pointed out the great interest that exists for many destinations and for all forms of tourism in Greece, not only for the summer months but also for next autumn, while he made special reference to religious tourism which is chosen by many Romanians who visit our country.

The following is the statement of Vassilis Kikilias:

"The Romanian market is very important to us. And for road tourism but also for the flights that now come from Bucharest, Cluj and other cities to Athens, Thessaloniki, to mainland destinations where there are airports and on our islands. I see a strong increase in both places and destinations.

Based on the strategy we have drawn up for the alternative destinations, which we...