Leaders of the six opposition parties meet for coalition protocol 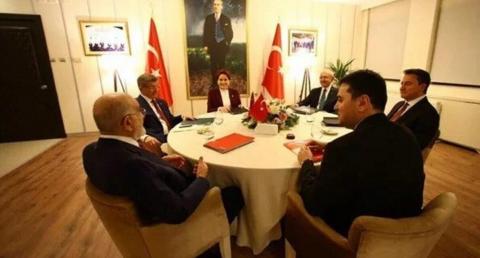 The six leaders focused on the management architecture of the new strengthened presidential system proposal, with the calendar of the system change they will realize during their possible period of power, which is also called the "coalition protocol."

They reviewed the work on constitutional and legal reforms prepared by the joint commission of the six parties, which will soon be made public.

"If elected, what powers the Nation Alliance will use during and after the President's transition period, whether a joint cabinet will be formed, whether leaders will be in the cabinet, what the new cabinet will do in the first week, a month, 100 days, 1-year, 2-year periods were on the agenda of the meeting," sources from the opposition parties told daily Hürriyet on condition of anonymity.

The leaders, who previously determined the criteria for the Presidential candidate by saying that he/she will be a "compromising, liberal, meritorious candidate who has internalized democratic values, embraces the whole of our nation, adopts the principles of political morality," left the announcement of the name of the candidate until after the election decision.