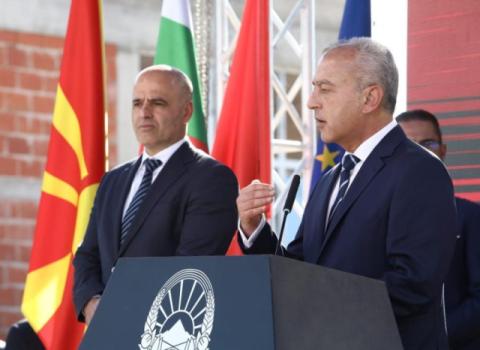 The Prime Ministers of Bulgaria and the Republic of North Macedonia, Galab Donev and Dimitar Kovachevski, launched the construction of the railway line from Kumanovo to Beljakovce in our southwestern neighbor. The line should reach the border with Bulgaria and is part of the trans-European corridor number 8 - a project more than two decades old. Kovachevski and Donev did not miss the hot topic of the opening of the Macedonian cultural club "Nikola Vaptsarov" in Blagoevgrad today.

Corridor 8 aims to connect Italy, Albania, RNM and Bulgaria, from Brindisi-via Durres-Tirana-Skopje-Sofia-Plovdiv-Burgas and Varna and is of strategic importance for the EU and NATO.

The infrastructure located in corridor number 8 has been the desire of a number of generations over the past 140 years, noted Prime Minister Galab Donev. His colleague, Dimitar Kovachevski, that with the railway the two countries are building their common future, which is: regional connectivity, good neighborliness, economic development, fast travel for people on both sides of the border.

Regarding the "Nikola Vaptsarov" club, which will be opened today in Blagoevgrad, Prime Minister Kovachevski indicated that he cannot stop anyone who wants to go from doing so, but that Skopje will send an official request for an official club in the city, and the Prime Minister Donev - that the organization behind the club has a pronounced anti-European profile and that...