Tabakovic: Control of loan from UAE 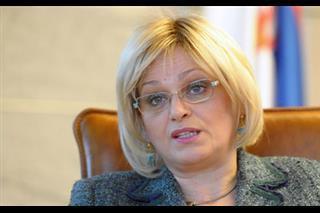 BELGRADE - National Bank of Serbia (NBS) Governor Jorgovanka Tabakovic said Friday that it is vital for the one-billion-dollar loan from the United Arab Emirates (UAE) to be channeled into areas where it can be controlled and used most effectively.

Tabakovic said a special body will be set up to control the use of the money, recalling that no restrictions have been imposed in terms of spending and confidence has been expressed that Serbia's authorities are responsible and will only invest money where they find it is most appropriate.

Positive things have been being said in the international public about Serbia for several months now and awareness is growing that Serbia can be a partner, Tabakovic said on a Belgrade-based TV Pink talk show Friday morning.

The NBS governor added that Serbia has been commended “from London to America” for keeping the exchange rate and inflation stable and maintaining a favorable macroeconomic climate.

Speaking about the country’s public debt, Tabakovic stated that the Serbian authorities have since 2000 to date taken out a total of 232 loans and some of the monies were spent inappropriately.