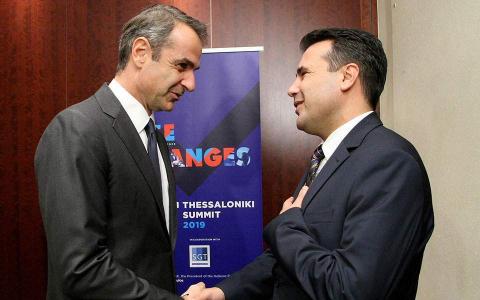 Greek Prime Minister Kyriakos Mitsotakis on Thursday essentially offered his support to North Macedonia Premier Zoran Zaev and his country's effort to unstick its stalled bid for European Union accession talks but emphasized that Skopje would have to honor the terms of the Prespes name deal.

In talks between the two men in Thessaloniki, Mitsotakis reportedly told Zaev "You can count on me." Their discussion focused on the decision by the European Council not to approve the launch of EU accession talks with North Macedonia following a veto by France.

The talks took place on the sidelines of the Thessaloniki Summit 2019, a business event organized by the Federation of Industries of Greece.

According to government spokesman Stelios Petsas, Mitsotakis reiterated Greece's support for the enlargement of the EU to include Western Balkan countries, saying this would...

Brancusi Day - marked by embassies in Bucharest with images of his works from Pompidou, Guggenheim