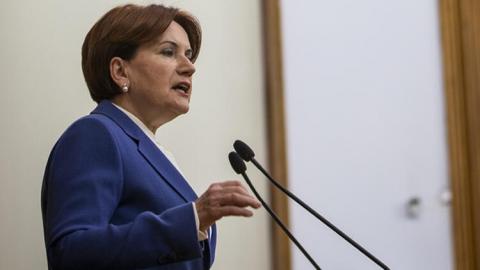 İYİ (Good) Party chair Meral Akşener has turned down a proposal by President Recep Tayyip Erdoğan to join the People's Alliance between the ruling Justice and Development Party (AKP) and the Nationalist Movement Party (MHP), stressing she would never leave her party comrades in the lurch.

"We, as the İYİ Party, have never left anybody or any group in the lurch unless they act against the interests and values of our people," Akşener told reporters on Aug. 11 during a visit to the Central Anatolian province of Kırıkkale.

The İYİ Party is part of the Nation Alliance established with the main opposition Republican People's Party (CHP), the Felicity Party and the Democrat Party. The Nation Alliance has succeeded to win six out of Turkey's 10 biggest cities in 2019 local elections including Istanbul and Ankara.

Akşener, a former member of the MHP, had founded her own party after she was expelled from the nationalist party by chair Devlet Bahçeli. Bahçeli, in a statement last week, called on Akşener to return home and to end the division. His call was supported by Erdoğan who invited İYİ Party to join the People's Alliance.

Akşener recalled that the AKP and MHP have an arithmetic majority in parliament and they do not need the support of İYİ Party. On foreign policy, İYİ Party and other opposition parties also lend support to the government's acts, she said.

Akşener said İYİ Party can support the People's Alliance if these two parties agree to reverse the governance model into a strengthened parliamentary system. "We have always said that the one-party presidential system does not fit Turkey. Our proposal is to adopt the upgraded parliamentary system. If they ask our help on this, we'll sure support it," she stressed.