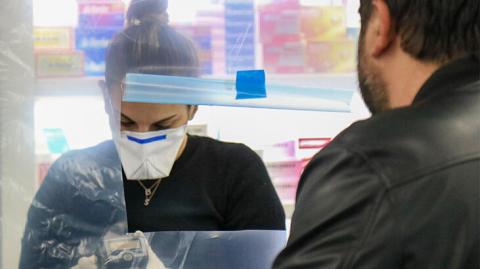 Turkey may take additional measures to bring the COVID-19 outbreak under control, President Recep Tayyip Erdoğan has said as the country has seen a spike in the number of virus cases over the past weeks.

"We have to introduce those measures in line with the steps the Health Ministry has taken and we will continue to do so," Erdoğan told reporters in Istanbul on Nov. 27.

People are still ignoring basic anti-virus rules, such as social distancing, face masks and hygiene, the president stressed, calling on the public to stick to the restrictions.

"The Health Ministry's Science Board is undertaking all necessary work and precautions. But what is crucial here is people's compliance with the curbs," Erdoğan said.

Turkey has a strong health infrastructure to handle the outbreak, he added.

The president also noted Turkey has been in talks regarding the supply of the vaccine for COVID-19 from other countries.

Koca earlier this week announced that Ankara signed a contract to buy 50 million doses of the COVID-19 vaccine from China's Sinovac Biotech.