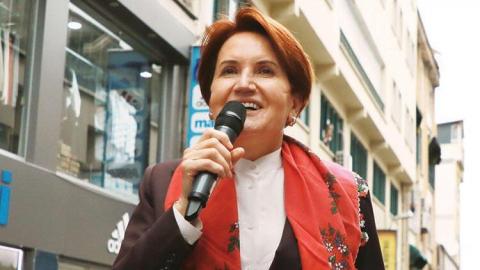 Meral Akşener, the chair of İYİ (Good) Party, has said she will not run for president but she will race for prime minister in the next elections, in a statement to emphasize that the opposition's joint bid to replace the current executive-presidency with the parliamentary system.

"I am not a candidate [for presidency]. I can speak for myself. I am not a presidential candidate, clearly," Akşener said in a televised interview over the weekend. "I am a candidate for prime minister," she added. Turkey has no prime ministry in the current system.

İYİ Party is a member of the Nation Alliance composed along with the main opposition Republican People's Party (CHP), the Felicity Party and the Democrat Party. The Democracy and Progress Party (DEVA) and the Future Party are also acting together with the alliance. The representatives of these six parties had a meeting last week to discuss how to return to the parliamentary system if they come to power in the next elections.

Akşener's statement aims to emphasize the need to change the government system in Turkey that has been running since 2018. "We will elect a president but this president will lay the foundations of returning to the parliamentary system," Akşener said, reiterating that the opposition should run with a joint presidential candidate to win the elections.

In the meantime, deputy parliamentary group leader of İYİ Party, Müsavat Dervişoğlu, stressed that Akşener's statement was a criticism of the current presidential system.

"This is a call for democracy. Everyone should be able to get their share of this call. This call is not just a call to the Nation Alliance. This call was made to all political actors," he said.