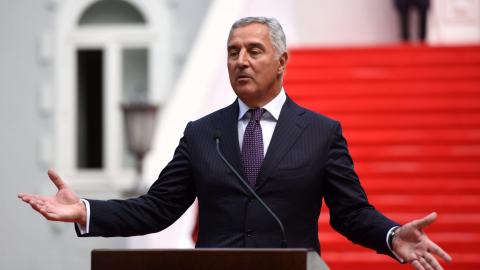 On November 13, BIRN has published theTaci's wiretapped conversations in which the Albanian businessman said he had involved Djukanovic in money transfers to Montenegro's Prva Bank.

"It is a completely fabricated affair. I don't know who the people are, nor have I had contact with them in any way … this is a complete forgery, but these forgeries have become a kind of practice in political life in Montenegro," Djukanovic told a press conference in Cetinje after meeting Polish President Andrzej Duda.

On November 12, Albania's Special Prosecution against Corruption, SPAK, issued an arrest warrant for Taci, accused with four Italian citizens and two accomplices of money laundering and of running a structured criminal group.

According to SPAK, the group laundered profits from Italian oil businesses through Albania in return for a share of the cash. A court in Palermo is also investigating whether Thaci and several Italian citizens laundered more than 20 million euros.

The media reported that Taci joined forces with a group of Italian citizens to transfer about 20 million euros to accounts of Albanian banks so that they are not blocked by Italian police.

BIRN has published Taci's wiretapping conversations in which he said Djukanovic will help him transfer the money to Prva Bank, owned by his brother, Aco Djukanovic.

On Tuesday, Prva Banka denied the accusations, claiming that the media were trying to cause damage to the bank and its shareholders.

In 2016, a European Parliament resolution urged Montenegro to investigate and prosecute the "high-level cases including alleged money laundering by Prva Banka (First Bank)."