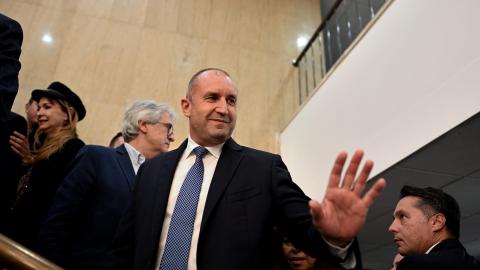 His centre-right rival, Anastas Gerdjikov, came far behind with 31.9 per cent in as yet incomplete results. However, in a sign of widespread political apathy, the turnout was at an all-time low of only 34.1 per cent.

This was the second round of the presidential elections after the first on November 14, when Radev was first on 49.42 per cent of votes cast.

As he did last time in 2016, Radev ran as an independent candidate, though supported by the Bulgarian Socialist Party, while Sofia University rector Gerdjikov ran also as an independent, but backed up by the former ruling GERB party.

"The fact that one [candidate] won and the other lost feels irrelevant when 80 per cent of society feels unrepresented," Gerdjikov told the media on Sunday evening, referencing the poor turnout, and adding that perhaps he hadn't fully convinced voters that he was truly independent.

"The status quo tried to come back on a white horse, but failed," Radev said in his first comments, referencing GERB's support for his rival.

The second round was preceded by several controversies: during a TV debate on Friday, Radev described the Russian-annexed Ukrainian territory of Crimea as Russian, which drew criticism from Ukraine. Western and NATO policy has not recognised the unilateral annexation.

Meanwhile, Gerdjikov appeared in promotional posters in Turkey, which led to criticism of the Movement of Rights and Freedoms party, focused on the Turkish diaspora in Bulgaria and on voters with dual citizenship favouring GERB. According to the polling agency Alpha Research, 70 per cent...

Bulgaria will Donate 250,000 doses of the Pfizer Vaccine to Bosnia and Herzegovina