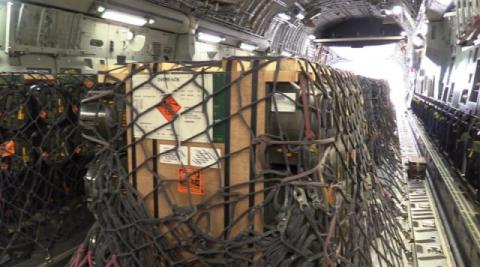 US military aid arrived in Ukraine on Friday night, the US Embassy in Kiev stated. The delivery is part of a package of defense aid approved in December and comes amid a gathering of Russian troops on the border with Ukraine.

On Friday, Estonia, Latvia and Lithuania announced that they would provide Ukraine with missiles for air and ground defense. According to a joint statement by the three Baltic states, the goal is to help Kiev in the event of a Russian invasion.

The news of the military aid comes amid growing tensions over the build-up of Russian troops to Ukraine. The United States has described the situation as a prelude to an attack and is negotiating with Moscow to de-escalate tensions with its NATO allies.

The US military aid delivered on Friday night includes about 90 tons of ammunition. It is part of a package approved by US President Joe Biden in December, worth $ 200 million, reminds the BBC.

The US embassy in Kiev said in a statement that the delivery showed "a firm commitment to Ukraine's sovereign right to self-defense."

"The United States will continue to provide such assistance and support the Ukrainian military in its ongoing efforts to defend Ukraine's sovereignty and territorial integrity against Russian aggression," the statement said.

The delivery comes after US Secretary of State Anthony Blinken's visit to Kiev, where he warned Moscow that a possible attack would receive a firm response. Russia denies planning an invasion of Ukraine.

The Baltic states have announced that they will provide Ukraine with surface-to-air and surface-to-surface missiles.

An essential turnaround follows?; Zelensky: "We are ready to fight for a decade"

What if he wins?