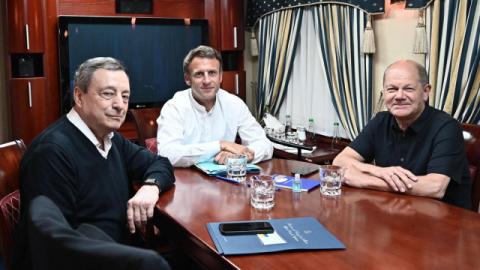 By train to Kyiv - Macron, Scholz and Draghi arrived in Ukraine

The three European leaders want to reject criticism in Ukraine itself of the way they react to the war. Scholz told the German newspaper Bild that they want to show not only solidarity, but also to assure that aid - financial, humanitarian, but also when it comes to weapons - will continue. Ukraine's hopes of joining the European Union will no doubt be among the topics of conversation with the Ukrainian president.

The visit comes a day before the European Commission makes a recommendation on Ukraine's status as a candidate for membership in the bloc.

The three leaders will hold talks with Ukrainian President Volodymyr Zelensky on further support for his country and its desire to join the European Union.

The trip of the three was planned for days, but for security reasons, it was officially confirmed shortly before their arrival in the Ukrainian capital.

It has now become clear that Scholz flew to southern Poland last night. Shortly after midnight, he, Macron, and Draghi took a train from the border town of Przemysl.

In Kyiv, the three will be joined by Romanian President Klaus Iohannis, who has chosen another route there.

Their visit comes a day before the European Commission adopts an opinion on whether Ukraine will be granted EU candidate status.