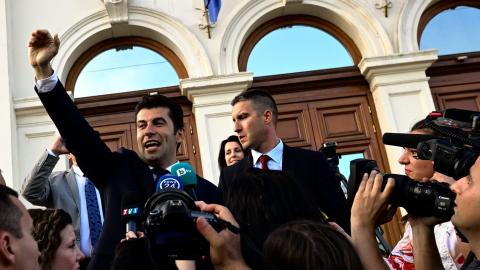 Bulgarian Prime Minister Kiril Petkov greets his supporters after the no confidence vote against his government in front of Bulgarian parliament in Sofia, Bulgaria, 22 June 2022. The coalition government of Bulgaria, led by the pro-European Kiril Petkov, lost a censure motion in the Sofia Parliament on 22 June, presented by the conservative populist opposition, for which the Balkan country faces possible new elections, the fourth in less than 18 months. EPA-EFE/VASSIL DONEV

After the ouster of the Government of Prime Minister Kiril Petkov in a vote of no confidence at the end of June, Bulgaria is now heading for another Parliamentary election. The fourth one in two years.

Our analysis this week looks at how the high hopes invested in the Petkov Government came crashing down. In his parting statement, Petkov declared that he could fight corruption, but not Russia's meddling - alluding to Moscow's involvement in the collapse of his pro-Western government. As Bulgaria gears up for fresh elections in the autumn, there is little to suggest that the next Parliament - and government - will be any more coherent or long-lasting.

Bulgaria is not the only country where the war in Ukraine is straining the ruling coalition. In Moldova, the pro-EU government of Prime Minister Natalia Gavrilita and...

Ukraine is just the beginning? Check out the Balkans and guess who's next