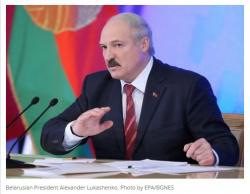 Belarusian President Aleksandr Lukashenko has said he will not attend Victory Day celebrations in Russian capital Moscow on May 9.

Lukashenko has cited the need to receive Minsk's own parade marking the 70th anniversary since the end of World War Two in 1945.

"It is unacceptable when there is no Commander-in-chief does not attend [such an event]. Under the Constitution in Belarus, except for the Commander-in-chief nobody can receive a parade. Therefore the parade either does not [happen] or it does. If there is a President - there is a parade," Lukashenko is quoted by Belarusian News (Belorusskoe Telegrafnoe Agentstvo BELTA) as saying.

Lukashenko will be in Moscow for May 7 and 8 commemorations to show his country's unity with Russia, but will return to Minsk afterwards.

His comments come after a mass boycott of the Victory Day anniversary by most EU member states' leaders, including by Bulgarian President Rosen Plevneliev.

So far less than half of 60 heads of state invited to the event have confirmed their participation. Those who have said "yes" include presidents ot Kazakhstan and Tajikistan, and also Czech President Milos Zeman, whose attendance and subsequent remarks by the US envoy raised tension between Prague and Washington.