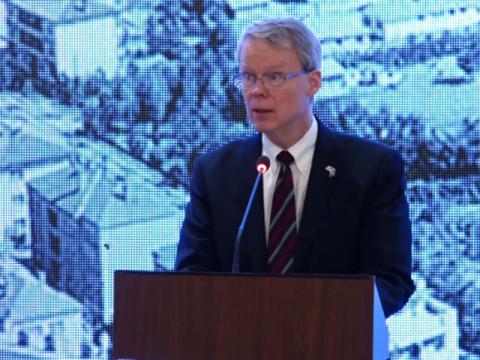 America's ambassador to Kosovo has sparked concerns that the US might endorse Kosovo's partition after declining to rule it out in an interview.

In the interview given to Kosovo's KTV on Thursday, Greg Delawie avoided giving a straight answer, when asked whether the US excluded partition as a solution to the Serbia-Kosovo dispute.

Asked what the US stand on partition was, Delawie replied that Kosovo would have to agree on whatever the final deal may be.

"I'm not going to get at what could be the elements of a deal, of an agreement, at this point. … I can say that Kosovo politicians, Kosovo citizens, are fully capable of making these decisions on the negotiating positions themselves, and the United States will be standing by them as they talk about these things," Delawie said.

Kosovo declared independence from Serbia in 2008, which Belgrade has refused to recognise. EU-mediated talks on normalisation of relations were launched in Brussels in 2011. Since June, both sides have stated that the talks are entering the final stage.

In February, the US embassy to Kosovo told Radio Free Europe: "We do not support the exchange of territories or the establishment of precedents that would cause more problems than solutions,...

Taking off the masks – Not yet, but soon!

How Serbia Can Learn from Germany’s Post-War Remorse