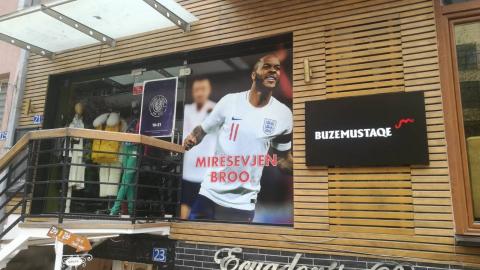 While Sterling and Co were met with monkey chants and Nazi salutes from the terraces in Sofia, Bulgaria, last month, they face being feted as heroes by the home fans in Kosovo on Sunday, where Britain remains revered for its role in 11 weeks of NATO air strikes that drove out Serbian forces two decades ago and for its work in cementing Kosovo statehood since the territory declared independence in 2008.

Kosovo's ultras, known as Dardanet, say they are preparing to lay on a show, rejecting the racism that England's players have met on previous trips to the Balkans and which Kosovo says it too endured as a province of Serbia, when ethnic Albanians faced systematic discrimination.

"We as a fan group have worked on this campaign for over two months now for the game against England," said Dardanet leader Luli Berisha.

"Our main focus was to show the players and the visiting fans a gesture of thanks for all they have done for both our country and our sporting entities over the years through our traditional sense of hospitality."

"It's a brilliant gesture of solidarity," Kosovar author Gazmend Kapllani said of the welcome banners. "Albanians have often been the target of racist slurs and scorn."

England clinched qualification on Thursday night at home against Montenegro, running away 7-0 winners. Kosovo, however, lost out on the second qualifying spot with a 2-1 defeat to the Czech Republic in Plzen.

Kosovo still has a chance of going through, however, via the UEFA Nations League playoffs in March next year, which will decide the last four places in Euro 2020.

"We are disappointed that we lost,...