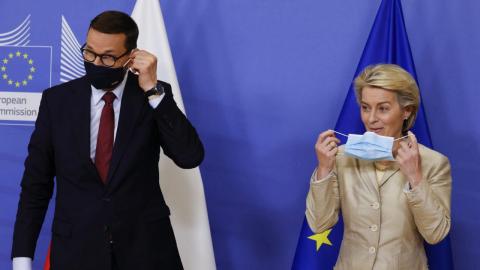 Poland's Constitutional Tribunal, in one of two cases it deliberated on, has called into question the primacy of EU law. The Tribunal, widely seen as controlled by the governing Law and Justice party, PiS, is expected to issue a similar ruling in the second case, now postponed to August 3.

In both cases, the Tribunal is deciding whether certain aspects of EU Treaties are compatible with the Polish constitution. Taken together, they would allow the PiS to argue it can implement whatever reforms it wants in the justice system without being challenged before the European Court of Justice, ECJ.

Countries joining the European Union must agree that EU law has primacy over national law. The Polish government, however, is using the Tribunal to dispute that fundamental principle.

Speaking during a Tribunal hearing on Tuesday, Polish Ombudsman Adam Bodnar said it was an attempt to "exclude the Polish judiciary from the requirements of EU law", and that it meant "playing with fire", as it could even lead to Poland exiting the EU.

Since the conservative-nationalist party took power in 2015, it has implemented a series of justice reforms which amount to an attempt to politically control the judiciary.

While the PiS claims the measures are needed to clean up an ineffective and corrupted system, the European Commission has said they breach EU fundamental norms, such as judicial independence, and has opened several infringement procedures against Poland.

The ECJ has consequently ruled that some justice reforms implemented by...