Belgrade's message: "Don't make a storm in a teacup" 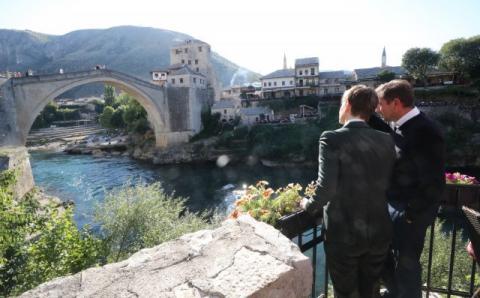 Sharing her impressions with journalists about Mostar and the old city center, saying that she feels beautiful in that city, Brnabi referred to the support of the Government of the Republic of Serbia to the Serbian community in Mostar.
The most important project is, of course, the Cathedral, in the construction of which we have invested almost two million euros. There is one million euros left for the full completion and we will do our best to finance it. Also, "Prosveta" school is something we finance continuously.
"We have equipped the office for information technologies and we will see what else we can do. That is not enough for us, and for these people it means a lot here and, in fact, the most important thing is that people here feel our support," Brnabic said. I could hardly believe what Milanovic's stated, it was unbelievable to me.
"Where there is a problem of legal uncertainty, that would mean that there is a problem with all other concessions that were given before," stated Brnabi.
Brnabic said that during her visit to Herzegovina, she did not ignore state institutions and that she addressed the institutions in Bosnia-Herzegovina in accordance with all protocols. As she said, this is her one-day visit to the Serbian community in Herzegovina, and she said that "we should not make a storm in a teacup".
She also rejected the comparison with the President of Croatia, Zoran Milanovi, that she is the Prime Minister of the Herzegovinian Serbs, as he stated that he is the President of Bosnia and Herzegovina's Croats, and as stated by Nasa Party.
"I don't see it that way. Milanovic's statement was unbelievable to me and it was unbelievable that there were no reactions, even from the European Union. I am the Prime Minister of...